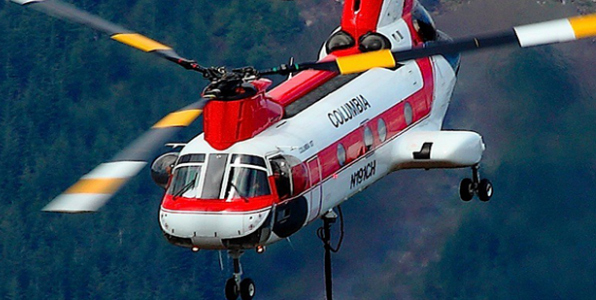 Built at the turn of the century, during Washington’s short-lived mining boom, the Pride of the Woods mine was abandoned by the 1920s, leaving behind mine tailings laden with toxic metals like lead and arsenic. These tailings had been leaching into the soil and nearby groundwater, posing serious health and environmental threats to both man and nature.

While other abandoned mine sites in the area had access roads, aiding in the reclamation process, the Pride of The Woods – located in the Henry M. Jackson wilderness area where machinery is not allowed – was unique in that it had no road access at all. The challenge was two-fold: how to remove environmental waste without altering the existing environmental footprint to protect delicate eco-systems, endangered species and cultural and historical artifacts.

Using fly-in helicopters from Oregon-based Columbia Helicopters, excavators and buckets were brought in. Three A-200D Boscaro Self-Dumping Bins were used; two alternated between load and transit while one was kept in reserve. The entire site clean-up took only 12 days and required less time than originally planned, due in large part to the efficiency of the Boscaro
bins. The bins’ mechanical arms allowed for easy hook-up, worked flawlessly from beginning to end and earned some serious respect from the helicopter pilots. The Boscaro self dumping bins offer great improved safety and efficiency by eliminating the need for hands on interaction with the bucket to perform unloading. All of our bins have steel construction to ensure durability while remaining light weight to ensure maximum capacity.

All bins are built to meet and exceed all ASME regulations qualifying them for use across North America and come with all the necessary conformity documents to the ASME standards. Each bin ships with its own conformity document matching the serial number of the bin to ensure compliance