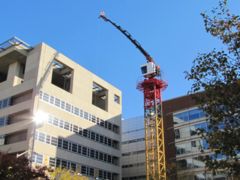 In some cases, developing a creative lifting solution truly is a matter of life and death.  In the fall of 2010, Baltimore’s University of Maryland Medical School Trauma Center project faced the challenges typical to tower crane use in an urban setting: a lack of space, traffic and wind.

But the use of a tower crane presented another, more acute drawback: it created an obstacle for flights transporting seriously injured patients to the trauma center’s rooftop helipad.

The ultimate solution – one that actually accelerated the project’s timeline- involved a different kind of crane, a special adaption, and creative thinking by a team of construction professionals.

When The University of Maryland Medical School in Baltimore opened its shock trauma center in 1989, it quickly became a national model for trauma, emergency and critical care. But as the center approached its 20th anniversary, it was admitting double its patient capacity annually, and was in dire need of expansion -perhaps even an entirely new facility. In the spring of 2009, officials began planning how to develop a new structure that maintained the quality of the past and prepared for the needs of the future.

The university’s vision was a new, state-of-the-art National Trauma and Emergency Training Center at the corner of Lombard and Penn Streets in Baltimore. The building would be connected to the existing Shock Trauma Center and Weinberg Building, and would be at the forefront of advancing the care of trauma patients and educating civilian and military health care professionals.

The standard construction practice when building a high-rise structure in a developed location like downtown Baltimore is to place a tower crane on the ground or mount one on an adjacent building. The crane would lift materials from these locations to the various building levels as needed.

A tower crane typically requires substantial clearance space to accommodate “weathervaning” – or rotation of the crane rigging — in the event of high winds. The proposed location for the tower crane made this impractical, as it would only be able to service about 60 percent of the structure.

In addition, progress on a previous University of Maryland Medical School project had been slowed by having to stop construction and move the crane for incoming helipad traffic. Retracting the crane to a neutral or “zero-degree” position multiple times each day added hours of downtime to the project. Hospital, city and construction representatives were adamant that this inefficiency – and potential safety hazard – needed to be resolved for the new project to move forward.

With the option of using a tower crane off the table, the next likely solution was to deploy a crane on the street and use it to lift materials, but that also presented a challenge. Representatives from the hospital were concerned that the resulting street closures would restrict ambulance access to the emergency room bays-another unacceptable option.

DGS Construction needed a way to keep all routes clear for emergency medical traffic, but they still needed to find a way to move and maneuver materials to the construction teams on different floors of the building. It was at this point that John Bildstein, head of special operations for DGS, turned to Baltimore-based Fascan International, the US distributor of Fassi cranes, for a way to keep the project on track.

In previous projects with similar challenges, Bildstein had consulted Jeff Kline, vice president of Crane Specialists, a company that had regularly worked as part of Fascan’s team. Kline had made the case to Bildstein that using a Fascan knuckleboom crane on the construction of a high-rise structure had definite advantanges. Bildstein decided that this was a perfect project to apply Kline’s expertise.

“Jeff is very practical,” Bildstein said. “And he enjoys the opportunity to adapt Fascan equipment to meet unusual and specific requirements. He showed us that the knuckleboom was the only piece of equipment that could be brought to a zero-degree angle in a timely manner and still safely work on the structure.”

In partnership with Fascan, Kline created a customized solution to the unique problems presented by the construction site. Together, they mounted a heavy-duty Fascan knuckle boom crane to the crane mast already in place.

“We see ourselves as problem solvers,” said Bernie Faloney, Fascan’s CEO. “And we knew that with the limitations of downtown construction and the need to be able to respond quickly to incoming air traffic – in addition to the timetable of building a much needed, state-of-the-art medical center – we would have to bring all of our expertise to the table.”

The resulting piece of equipment addressed the problem in several ways:

The Fascan crane could easily reach the height needed to perform all of the required lifting and maneuvering with a 360-degree rotation.

The Fascan crane would be able to work in a wind speed of 45 mph, compared to the 20 mph limitations of a boom crane. The configuration of the crane proposed by Fascan would make it exempt from weathervaning restrictions.

The knuckleboom crane would be able to fully retract to a neutral position in just seven minutes, and when fully retracted, would be nearly seven feet beneath the helipad. With an advanced warning call of incoming helicopter traffic from Maryland State Police, the crane could lower its boom in a timely manner and cease operation until the area was clear. Likewise, construction work could be quickly resumed when the helipad was clear.

The elevated work platform had a fixed footprint that eliminated traffic concerns.

Special remote hybrid controls were developed to allow maximum freedom and visibility for the operator without creating radio interference for air traffic.

“I’m sure that the very specialized solution Fascan developed for us was one of the key factors in why we were awarded the job,” Bildstein said.

Construction on the Shock Trauma Center began in October of 2010, and is projected to be completed in the spring of 2013. According to Don Wickesser, III, general manager of DGS Construction, the construction team has stayed on track and is poised to be ahead of schedule.

“If it wasn’t for the Fascan crane the project could be behind schedule and we would have incurred hours of overtime to get us to where we are now,” Wickesser said. “At this point in construction, we are actually beginning to gain ground on the timeline. When the concrete portion is complete, the project will be six weeks ahead of schedule.”