A crane operator has died after his crawler crane overturned in North Douglas, near Juneau, Alaska on Thursday.

The man, Boyd Cody, 75, was operating the crane from a barge in the Gastineau Channel, moving a larger generator at the yard of Trucano Construction in North Douglas when it tipped onto its side. Local reports suggest that Cody tried to jump clear of the crane but was caught as it went over and crushed. 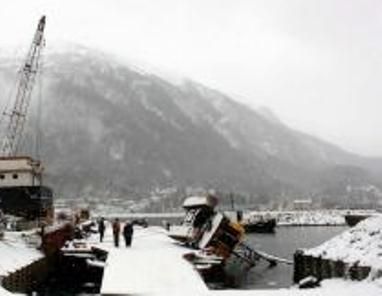 The crane ended up half in and half out of the water and was finally recovered along with the body this weekend. Poor weather, including ice and snow hampered the recovery.

The Federal Occupational Safety and Health Administration has said that it will be investigating the incident. The only photographs that we have been sent provide few clues as to what happened, although the boom appears to have gone over the rear of the crane.