A recently uploaded video is circulating claiming to show a crawler crane dropping a heavy load onto a bus.

The story goes that some young skateboarders were filming each other in an Amsterdam park when the incident occurred behind them.

We believe that it is a stunt that the two were well aware was going to happen. And we are not sure that it is even in Amsterdam – looks more Belgium than Holland. It could well have been a carried out for a film?  The actual dropping of the poorly rigged load onto the bus looks real enough, but staged. It was posted recently and was beginning to ‘go viral’ but something does not ring true.

Let us know if you have the full story, especially if it was your crane. 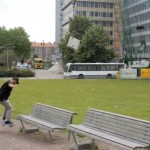 What is networking really? And are you doing enough of it?