A man received a massive electric shock earlier today in Bridgewater, Pennsylvania, after the crane he grabbed the hook of a lattice crawler crane that was working next to a 23,000 volt high tension overhead power line.

The incident occurred on the Bridgewater bridge construction project, the crane owned by Century Steel Erectors, was working in the barge loading area, while the man was standing on a docked barge, where he was heloiung rig another crawler crane. 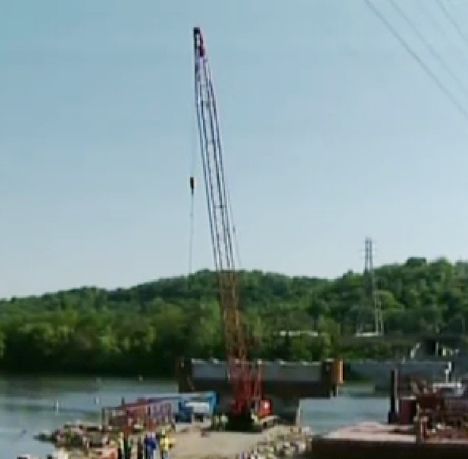 It is not certain if the crane actually touched the overhead wires, or if it merely got close enough for the power to arc to the crane and flow down the hoist cables to earth.

The man, a Century employee, received severe burns but was breathing and responsive when he was taken to hospital, he was later airlifted to a hospital in Pittsburgh.

All work on the bridge project was stopped awaiting the clearance by the utility company that the power lines are not damaged and the arrival of OSHA and its inspection.