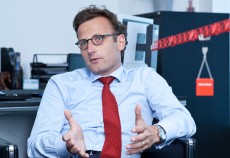 The number of tower crane accidents in Dubai and the UAE is not significantly different from Europe, says the head of the European crane manufacturers association.

Peter Schiefer, CEO of Wolffkran AG, and Chairman of the Tower Crane section of the Committee for European Construction Equipment (CECE) is due to give a talk on tower crane safety at the Big 5 in November.

Speaking with PMV Middle East, Schiefer said he was “positively surprised that in the last five-six years there have not been that many tragic accidents here in Dubai and in the region”.

“Given the amount of cranes around, you would expect many more accidents. The statistics are not that bad, and I think that speaks for itself of a certain level of quality that has been established in the [UAE].”

Failures in tower cranes tend to be more catastrophic than accidents with smaller mobile cranes, and also less common. Mobile cranes are cheaper to buy, can be rented out on a daily basis, and are sometimes operated by smaller companies who may have less expertise or less of a focus on safety than the large companies.

With a variety of safety issues for tower cranes, including the quality of the product, operator training, and the assembling and dismantling process, Schiefer says that in his role at the CECE the organisation will be looking at more than just product standards, and will go into driver education, driver certification, perhaps look at crane driver licences.

Regulations in Europe vary widely from country to country, says Schiefer, including some countries requiring licences for crane operators, while in others, including Germany, this is not required.

“It’s not like Europe is the holy grail of crane safety, and Dubai is worse. If you look into the crane statistics it’s quite surprising.”