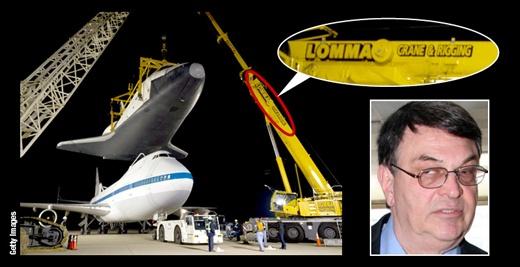 SAFETY FIRST: Construction boss James Lomma (right) sent opposing lawyers a link to this photo of his company’s cranes being used to hoist the space shuttle, after he beat criminal charges in the deaths of two workers.

Now he’s dancing on their graves.

Cleared of all criminal charges Thursday in the fatal 2008 collapse of a tower crane on East 91st Street, construction magnate James Lomma immediately fired off taunting e-mails to representatives for the tragedy’s two slain men, pointing them to recent photos of a Lomma crane hoisting NASA’s Space Shuttle Enterprise onto the carrier jet that flew it from Washington, DC, to New York.

But the two lawyers say that the message behind Lomma’s e-mail rang out loud and clear to them and their clients: Lomma was gloating.

“Donald [Leo’s father] couldn’t believe it — he said it’s like shoving it in our faces, like saying, ‘I got away with murder and I’m getting government contracts and I can’t be touched,’ ” said Panzella.

“[Donald] said this e-mail and this verdict brings him right back to when his son had just died. He’s going through that pain like it just happened, all over again,” Panzella said.

Karten had just hung up from a call to Kurtaj’s sobbing family in his native Kosovo when Lomma’s e-mail popped up on her screen.

The e-mail had a link to a photos posted by a space news Web site of a crane with the giant “Lomma” logo on its side hoisting the space shuttle onto its carrier jet in preparation for the next day’s trip from DC to New York.

“It’s absolutely, completely shameful,” said Karten. “It was a real smack in the face to send this e-mail to me at 10:30 on the night of the verdict.”

Lomma had been acquitted Thursday of all manslaughter, homicide, assault and endangerment charges against him in a verdict by Manhattan Supreme Court Justice Daniel Convisor.

Prosecutors had accused him of criminal recklessness in sending out to China for a shabbily constructed massive metal replacement bearing that cracked in two just five weeks after being installed.

Defense lawyers — who chose to bring the case before a judge alone, rather than a jury — had countered that it was operator error, not the bearing, that caused the collapse.

“When we have him across the street before a [civil] jury he’s not going to be able to snooker them the way he did the judge,” Panzella said yesterday.

“That jury is going to wipe the smirk right off of his face.”