A tower crane operator died after his crane collapsed on a high rise building site in Ara Damansara, Malaysia on Tuesday.

The man Mohd Hafadz Sanip, 26, had started operating the crane during the site’s morning briefing at Tower One, an 11 storey building currently being built by contractor Sime Darby. He had only started the job two weeks earlier, he was declared dead a the scene. It appears as if the top of the crane broke free from the tower, as the slew ring bolts or other component failed. 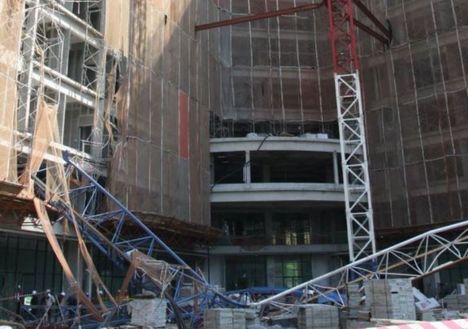 The scene at the site

A spokesman for Sime Darby, claiming to speak for joint venture company Sime Darby Brunsfield Holding (SDBH) said that construction has been suspended pending an investigation into the cause of the collapse.

The statement added: “We are extending our full cooperation to the relevant authorities including the Department of Occupational Safety and Hazard (DOSH), the police and the Malaysian Fire and Rescue Department in order to facilitate the on-going investigations”.

Ara Damansara is part of Pataling Jaya, a suburb of Kuala Lumpur.