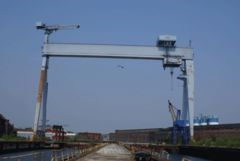 On 14 August 2008 one of the legs of a large goliath gantry crane collapsed while being dismantled in the USA. The crane was at the Fore River Shipyard in Quincy, Massachusetts.

The rail-mounted gantry crane was put in service in 1975. It is more than 400 feet long and more than 260 feet tall (Figure 1). The crane has four inclined legs that support a girder. Pairs of legs connected at the base with sill beams, which are supported on “bogies” that transfer the weight to the rail with a system of steel wheels. The two northern legs are referred to as “fixed legs”, and the two southern legs are referred to as “articulated legs” because of their ability to flex and accommodate expansion and contraction of the main girder.

Prior to arriving at his final dismantling plan for Leg #3, the Structural Engineer of Record (SER) had gone through some iterations of the plan which initially included using an assist crane to move the legs in half- or full-length sections, and later a hinge assembly-based procedure was designed which subsequently went through a number of changes as well. These changes to the plans were only verbally directed, and no written plan was ever made nor were the weld and hinge designs updated at each iteration.

The dismantling procedure involved the use of shoring towers which have an internal jacking system to support the crane girder while the legs were removed. The legs were to be removed in single 160 foot (49 m) pieces, accompanied by the gradual lowering of the girder. The leg removal procedure consisted of installing hinges at the 160 foot level, cutting the leg, and sliding the bottom of the leg along the rail as the crane is lowered. The leg was made to slide along the rail by the use of an assist crane and portable jack.

On the morning of 14 August 2008, partial cuts for Leg #3 were completed while the towers were supporting the crane girder. The leg with the skid was lowered onto the rail, without the rail underneath the skid being greased. The final cuts were completed, and the leg was pulled with a force of up to 48 kips with an assist crane. Since the leg did not slide, the leg was lifted with the jacking towers, which increased the load to the hinges. A portable jack was used to push the skid to initiate the sliding of the leg. After a few pumps, the friction was overcome. The skid moved violently, lifting off from the rail as it travelled horizontally. The hinges failed and the leg fell to the ground.

* The design calculations for the hinge assembly contained numerous substantive errors and omissions. The actual hinges could only safely support about 34% of the leg weight.

* There was no disassembly plan in place to limit the load applied to the hinges although the design calculations indicate only 60% of the weight would be transferred to the hinges.

* Critical mistakes were made during the disassembly that severely overloaded the hinges. The mistakes included jacking the towers to reduce the load on the skid, which resulted in an increase in the load to the hinge, and failing to lubricate the rail underneath the skid, which caused the project team to decide to jack up the crane.

* Structural collapses during demolition work, such as the crane collapse presented in this article, can be prevented, or at least minimised, by developing a proper demolition plan and following it, maintaining clear communication between the engineer and contractors during the project, properly reviewing the engineer’s work product, and retaining an independent firm to perform regular inspections of the work.