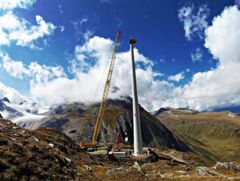 Welti-Furrer Pneukran & Spezialtransporte has erected a 2.3 megawatt Enercon E-70 wind turbine at an altitude of 2,465 metres, near the border between Switzerland and Italy. The work was completed on behalf of German company Enercon.

A Terex TC 2800-1 lattice boom truck crane was used for the main lifts. An AC 120 Terex all terrain was used as an auxiliary crane for setting up the boom of the TC 2800-1.

Erecting the wind turbine at the high altitude of the Swiss Alps involved a series of challenges. For a start the site is only accessible to vehicles for about four months during the summer, with snow blocking the route during the rest of the year.

Due to this short time, it was necessary to get the massive turbine components, as well as the crane, to the site, erect the wind turbine and disassemble the crane again quickly. To add to the challenge, the roads for transporting the cranes and components were narrow and winding.

“This is where the Terex TC 2800-1’s compact design and comparably small weight came in, as it allowed us to avoid doing any damage to the roads,” explained Tobias Schöpfer, head of communications at SwissWinds Development, the company responsible for planning and realising the project.

To transport the turbine blades the company had to use its “Millipede” (a specially designed multiple-axle carrier) transportation system to ensure that they would not damage the sensitive surrounding environment.

Once at the site, the team sent by Welti-Furrer was faced with extremely tight space conditions, about 20 by 20 m. To ensure that they would be working with ideal ground load conditions, the team set up the crane at the previously inspected edge of the slope, placing 20 square metre stabiliser pads under each outrigger.

“This enabled the crane, with its 14 by 14 metre support base, to work with enormous lifting capacities despite the difficult location,” said Werner Häfliger, head of the Welti-Furrer branch office in Zürich. “In fact, these lifting capacities are significantly larger than those provided by comparable crawler cranes (due to the greater support base), which also played a vital role in our decision to use the Terex TC 2800-1 for this project.”

With the location secured, the help of an additional 300 tonne capacity class crane was used to attach the front 50 m boom section.

The lifts themselves were made more difficult by the fact that the tight space conditions at the site prevented the team from working with the crane’s derrick boom and superlift ballast. The crane was rigged with an assembled 96 m SH/LH boom and a counterweight of 200 tonnes.

The crane was located 3 m above the wind turbine’s foundation while performing the work required for the project. This lifting work actually started with the pre-assembly of the concrete towers, which required working with a reach of 12 to 16 m. In sharp contrast, unloading the rotor blades from the Millipede system meant using a reach of 70 m. Finally, the actual erection process followed, this time with a working radius of 38 m.

“The enormous range in terms of reach was yet another important challenge that we had to deal with while carrying out this project, but by using the Terex TC 2800-1, we were able to overcome it without a hitch,” explained crane operator Peter Häfliger.

The project’s crowning achievement was marked by the very end of the erection process, in which the Welti-Furrer team lifted the nacelle, together with 50 ton generator and 70 m rotor, to a hub height of 85 m. After four straight weeks of work, the team finished the project on schedule, despite fog, wind, snowfall and hail.

The TC 2800-1 has a capacity of 600 tonnes and can be ordered with a crawler crane chassis (CC 2800-1) or with a truck crane chassis, then designated TC 2800-1. The truck crane chassis, designed by Terex, enables the basic crane to travel separately. Its star-type outriggers allow for a maximum support base of 14 by 14 m, which provides a high level of stability. In addition, this large support area allows the crane to provide superior lifting capacities and enables it to perform safe work even when used with long boom lengths. The machine can achieve a tip height of up to 192 m, and has a maximum main boom length of 138 m.