Space: the final frontier. Exploring the Universe has been the dream of humanity for centuries but only a reality in recent decades. However, we cannot explore space without a vast infrastructure of people and equipment behind this exploration. As the vehicles used to explore space change, the supporting structures must also evolve to the next generation of technology. 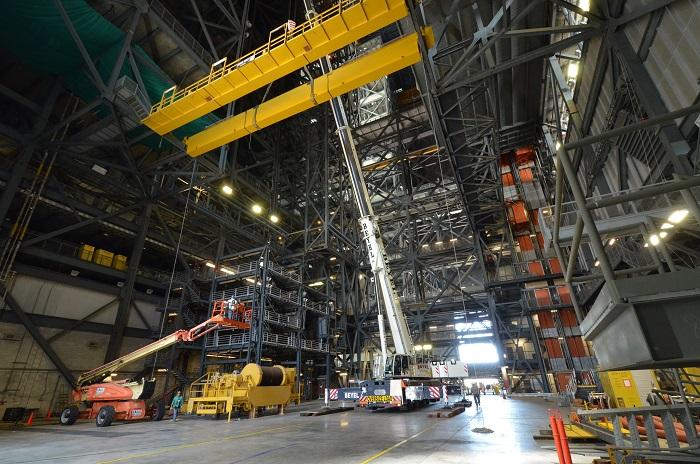 These structure changes are where heavy lifting and rigging is required. It’s also where Cocoa, Florida-based Beyel Brothers, Inc., the parent company of Beyel Brothers Crane and Rigging, plays an important role in helping to build the structures for the space program.

Beyel Brothers traces its roots to New York, 100 years ago where Dan Beyel, the great-grandfather of today’s owners, started his hauling and rigging business with a horse-drawn carriage. In the mid-1970s, company operations were moved to Florida, so the company could expand its services to include rigging and hauling work for the aerospace industry.

They entered the market at the right time: the end of the Saturn V program and the beginning of the Space Shuttle program. Shortly after moving south, the company got its first taste of an important mission. “We helped to remove the launch tower of the Saturn V Rocket,” recalls Steve Beyel, vice president of Beyel Brothers, Inc.

The company was also instrumental in helping to erect many of the structures to support the Space Shuttle program at the Kennedy Space Center. This included installing an overhead crane in the late 1970s in the Shuttle’s Vehicle Assembly Building (VAB), a crane that they dismantled in mid-March of this year.

The company recently purchased a new Terex® AC 350/6 all terrain crane with its first mission being to remove the building’s crane. Its 400-US-ton (350-tonne) capacity class and long main boom design made this the perfect hydraulic telescopic all terrain crane for removing the VAB’s overhead crane.

Once inside the VAB, Beyel Brothers’ crew set up the crane in a matter of four hours. “The boom pinning system on the Terex crane makes it much easier to telescope the boom,” says Beyel. Also aiding in crane rigging, the AC 350/6 features a self-rigging counterweight system.

Terex Cranes distributor, Renegar-Driggers Machinery Co., Inc. of Miami, Fla. thoroughly prepared Beyel Brothers in crane set up and operation. “Training on the AC 350/6 was excellent. Even the company’s salesman (Craig Corbett) was there for the whole time to make sure everything was covered,” comments Beyel.

Crews worked with 135 ft (40.7 m) of main boom to remove the overhead crane from the 526-ft (160 m) tall building, the largest single story building in the world. One critical pick was to remove the more than 50-USton (45.4-tonne) drum and cable trolley assembly. Working at a 40- to 45-ft (12.2- to 13.7-m) radius, the AC 350/6 all terrain crane effortlessly lowered the assembly to the floor of the building. “I liked the crane’s smoothness and how quiet it operated,” says Gordon Rideout, crane operator for Beyel Brothers. “It is very operator friendly.”

Even with NASA’s stringent lifting safety standards, which required the crane to stay within 75% of its load chart, the AC 350/6 crane was able to perform all lifts without the Sideways Superlift system. “Being able to do the lift without the superlift structure saved us an extra truck load, four to five hours of setup and two extra laborers,” says Beyel. “Not only did it save us time but it also saved us money.”

Crews also had to complete two picks of the massive girders, one weighing 26.5 UStons (24 tonnes) and the other 20 UStons (18.1-tonnes). Crew members reported that it was tight getting the 80-ft (24.4-m) long girders to the floor, but the crane’s responsiveness helped to navigate these areas. “The AC 350/6 met our expectations, and we’re happy with the way it performed,” mentions Beyel.

The Terex crane performed four additional picks to remove braces between the girders. Once all seven picks were complete, the AC 350/6 crane was derigged and moved out. Total time on the job from move-in to lifts to move out was a mere six days.

With the VAB project behind them, Steve Beyel looks forward to a job where crews can perform a tandem lift, using the AC 350/6 crane and the new 300-USton (250-tonne) capacity class Terex AC 250-1 crane which was purchased at the same time as the other crane. Like the AC 350/6, the AC 250-1 has a long main boom — 262.5 ft (80 m) — which is a primary reason for purchasing that crane. “They are both welcome additions to the fleet,” concludes Beyel.

Steve Beyel and his brothers Joseph, Philip, Danny and Mark, all co-owners of Beyel Brothers, grew up around the family business and lifts for the aerospace industry. “I recall driving the steerable dolly, picking up the booster rockets and moving the (Space Shuttle) Atlantis,” says Beyel.

Steve was a teenager when the family business installed the massive overhead crane at the VAB. At the time, there wasn’t a large enough hydraulic crane to hoist the overhead crane in place inside the building. Crews used winches bolted to the floor to lift the crane more than 100 ft (30.5 m) to its resting place.

Fast-forward nearly 35 years and the space program, Beyel Brothers and crane technology have all significantly advanced. The Space Shuttle program has ended and the VAB must make way for the next generation of space vehicles. Beyel Brothers is now one of the largest crane and rigging companies in the state of Florida, with a fleet that includes 75 Terex truck and all terrain cranes, including the AC350/6 all terrain crane which had the required capacity to much more easily remove the overhead crane than how it was installed.

About the Terex AC350/6 all terrain crane

By far the most powerful and compact 6-axle all terrain crane in the 350-tonne (400 US-t) capacity class currently available on the market, the Terex® AC 350/6 boasts exceptional lifting capacity and operator safety. Featuring a state-of-the-art fall arrest system for safe access during work at height and patented Terex Easy Luffing Jib Rigging System, the AC 350/6 all terrrain crane enables fast, easy rigging and safety. Offering a maximum telescopic boom length of up to 64 meters (210 ft) for an impressively compact maximum system length of 125.7 meters (412.4 ft), this powerful, versatile 6-axle crane can out-lift the performance of larger cranes in the 400-tonne (440 US-t) capacity class in a number of jobsite situations. Additional attachments can be loaded onto conventional trucks within a width of 8.4 ft (2.55 m).

Beyel Brothers, Inc. was formed in 1989 when brothers Joseph, Philip, Steve, Danny and Mark Beyel joined their assets together to buy out their father’s organization. Today, Beyel Brothers is one of the largest crane and rigging companies in the State of Florida. Beyond the aerospace industry, Beyel Brothers has vast experience in most every major industrial sector, including power distribution and generation, military, mining, nuclear energy, heavy civil construction, paper processing, wind power, industrial warehousing, industrial crane erection and relocation, and chemical and refining.