A crane hire company has been fined after two workers fell to their deaths when a crane collapsed. 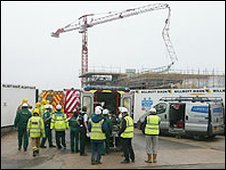 They were working for Eurolift (Tower Cranes) Ltd, which was taken over by WD Bennett Plant & Services Ltd in 2003.

The Hampshire-based company had admitted the breaches of the Health and Safety at Work Act 1974 at an earlier hearing.

Judge William Wood said the company deserved to be fined up to £200,000, but he accepted it would not be able to afford it as it had ceased operations since the accident.

WD Bennett, based in Gloucestershire, is currently in administration and will be sentenced when financial information becomes available.

It had denied both health and safety breaches but was found guilty following a trial at the same court in March.

The crane had been used in the construction of a school in Durrington before it collapsed.

During the trial, he told the court he had been asked to loosen the bolts of the crane’s tower despite having no training.

Witnesses described hearing “a noise like pistol shots” as the crane collapsed while Mr Miles and Mr Boatman were still up it.

Both men were flung off, and died of multiple head and chest injuries.

Jurors heard there had been a “management vacuum” at the site because the person in charge of health and safety was off sick on the day of the accident.