A 40 tonne crawler crane fell, the boom coming down on an area where people were working, at Broad Construction’s $50 million (£33 million) redevelopment of Mt Sheridan Plaza, Cairns, Australia. Fortunately no one was injured. 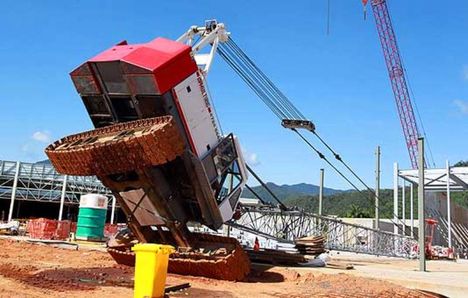 This is the second time Workplace Health and Safety officers have investigated an accident at the site, after a man was taken to hospital after falling from a concrete slab.

Local reports quote Electrical Trades Union organiser Stuart Traill as saying “The Mt Sheridan site is the worst he has seen during his four years as a union official and a tragedy waiting to happen.”

“It seems every time we go there, there’s another safety issue and it’s not until we turn up that Broad Construction takes it seriously. They’re cutting corners in the name of getting the job done quickly,” he added.

No further details are yet available on what caused it to go over though it would appear to be a case of overloading, workers have now been allowed back on site.