The new lift, sold to Shijiazhuang Fire Station, in Hong Kong, adds an 42 tonne/metre Effer 470 5S+JIB 3S loader crane to the back of a 20 metre B-20 truck mounted lift, modified for fire fighting and rescue work. 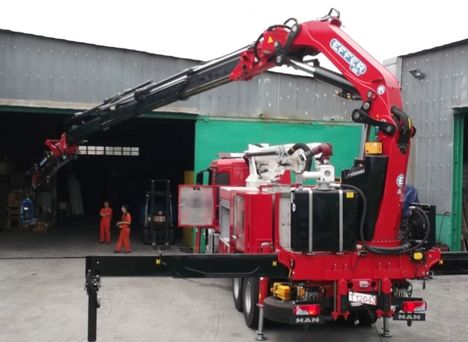 Shijiazhuang Fire wanted a rescue platform, fully equipped for fire fighting duties and combined with a crane for lifting hydraulic tools. CTE teamed up with sister company Effer to produce the custom machine, mounted on an Man truck fully equipped with a water tank and pump. The Effer crane has eight hydraulic extensions giving a maximum outreach of 22 metres.

CTE says that all of its B-Tower platforms up to 60 metres can be similarly fitted with a loader crane.