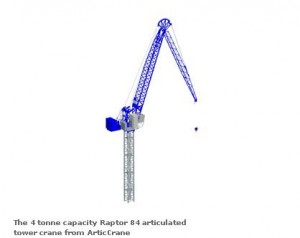 A new 4 tonne capacity articulated tower crane will be launched in August. The Raptor 84 from Sweden-based ArticCrane, is the company’s first model and has been a year in the making.

Part of the jib section is still under construction and once ready will undergo testing with the rest of the machine. One unit has already been sold to City Lifting, in the UK, and is due to start work in August 2009.

The Raptor 84 has a safe working load of 4 tonnes at 21 m radius and 2 tonnes at 32 m. The minimum out of service radius is 4 m, making it ideal for confined spaces such as inner-city sites, said the company. Freestanding height is 32 m using a standard 1.2 x 1.2 m tower, although towers with alternative dimensions are available.

Another feature is the modern cab, says the company. “The operator has full visibility of the load and work area at all times. [It includes a] comfortable and ergonomically adjusting seat with controllers to maximise the crane operator’s day-to-day performance,” said a company spokesman. The display screen also provides a full view at a single glance, ArticCrane added.

The company will concentrate on further articulated tower crane models in the future.

Written By: Euan Youdale
Used with permission from International Cranes and Specialized Transport