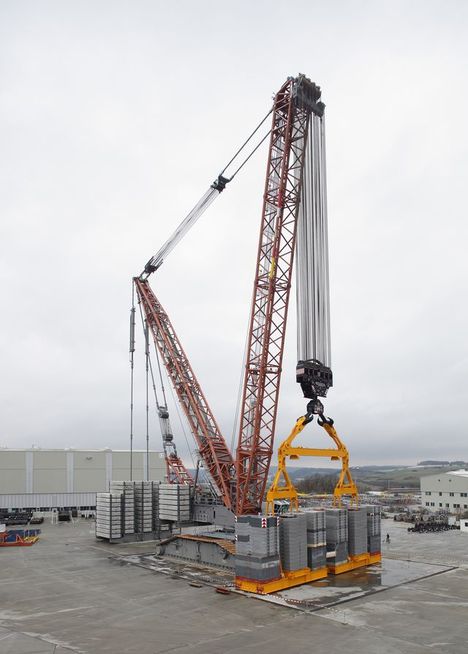 We now have more details on the Liebherr LR 13000 which lifted a test load of 3,371 tonnes at the end of November – the heaviest load ever been lifted by a Liebherr crane.  The crane was fitted with a 60 metre main boom, a 54 metre derrick boom, 400 tonnes of superstructure ballast and 1,500 tonnes of suspended ballast.  An even heavier lift is planned for early next year. For this the LR 13000 will be equipped with a new type of heavy-lift boom, which Liebherr has dubbed the P-boom or ‘Power boom’. With this system, Liebherr says the new crane should be able to lift 3,750 tonnes. Over the next few weeks the assembly and testing of a 120 metre main boom will be carried out.  Liebherr – which claims the LR 13000 is the most powerful conventional design crawler crane in the world – is aiming the LR 13000 at the power station construction sector where the lifting of extremely heavy individual items is essential. In refineries there is also an increasing demand for industrial columns weighing 1,500 tonnes and with lengths of 100 metres to be erected.  For any large capacity crane one of the major considerations is economical transportation. The LR 13000 has no single component weighing more than 70 tonnes transport weight. The concrete counterweight slabs weigh 25 tonnes and have the same dimensions as a 20-foot container and can be lifted and loaded with a spreader and Twistlock locking system.