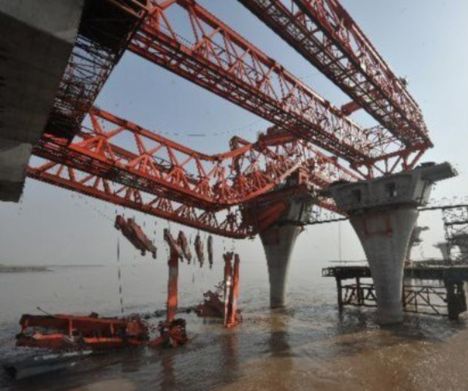 A launching crane has collapsed on the Jiaxing-Shaoxing Bridge construction site in China’s Zhejiang Province this morning. Reports say that two people have died and nine others injured in the accident.  A statement from the site said that one man died on site while the other was declared dead at the hospital. Of the nine injured, at least one of them is in critical condition.  The bridge is said to be world’s longest cable stayed bridge with a length of 2,680 metres, making it 200 metres longer than France’s Millau Viaduct, the bridge will have six piers supporting an eight lane roadway and will link the cities of Jiaxing and Shaoxing across the Hangzhou Bay as well as forming a section of a national highway, linking Shenyang with Haikou. It is due for completion in 2012.