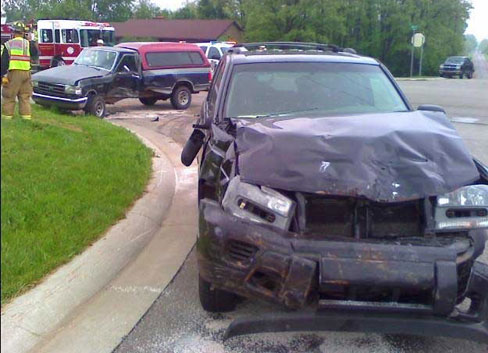 GEORGETOWN TOWNSHIP, Mich. (WOOD) – A construction crane that happened to be in the area lifted a pickup truck off a teen who was thrown from his vehicle in an accident moments before.

Zachary Wood, 17, of Grandville was heading westbound on Jackson Street in his Ford F-150 when he ran a stop sign at 8th Avenue. A passing SUV driven by a 23-year-old Grand Rapids woman could not avoid the pickup truck and hit it on the driver’s side. She was driving with her two children, who were sitting in the back seat.

Jordan Loomis, 17, of Grandville, was sitting in the front seat of the pickup truck before he was thrown onto the street. The truck fell on top of Loomis, partially pinning him.

Police officers who responded to the accident saw the crane nearby and asked for help from the operator.

It lifted the pickup truck off the teen, and righted the truck.

Loomis suffered some injuries, including 10 stitches, but has been released from the hospital. Wood left the hospital at 2 p.m. The mother and her two children were wearing their seat belts and were unhurt.

Police say it appears Loomis and Wood were not wearing their seat belts.