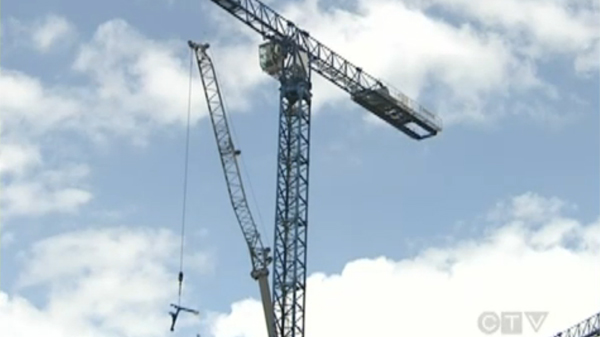 In many parts of Asia cranes are a symbol of good fortune.  The same can be said in Montreal, where construction cranes are a welcome return to a city that has seen its share of tough economic times.  After years, if not decades, of “A Louer” signs filling office windows throughout the city, cranes are popping up all over Montreal to build new hotels, skyscrapers, and hospitals.  Right now nine tower cranes are in operation at the Glen Yards campus of the MUHC superhospital, and more are on the way.

SNC Lavalin is heading up the construction, and even project managers are in awe of the sight.  “I come in from the West Island and I can see the cranes for quite a ways,” said Guy Bernard Daigle. “To me this is quite impressive.”  Nine cranes and counting.  Setting up a tower crane is a job in itself.  A mobile crane lifts all the parts into place while workers assemble the tower like a giant erector set.

Crane nine at the MUHC superhospital was set up earlier this month, while the tenth crane will be installed in June.  Once in place, the cranes haul everything needed.  “They move all kinds of materials whether it’s two by fours, electrical cables, anything and everything. Even portable toilets,” said Daigle.

The last construction project of a similar size in Montreal was the Olympic stadium.  Now, two hospitals are being built simultaneously, but Daigle doubts the University of Montreal hospital project will match the scope of the MUHC.  “They’re very urban, very dense so I’m not sure that they will ever get to nine cranes like we have here.”

The MUHC project is expected to take many more years to complete, with the first building opening up in three years.