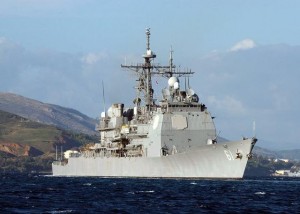 A commercial crane boom fell across the aft section of the cruiser Monterey at Norfolk Naval Station Monday as the operator was preparing to lift watertight doors off the deck, causing minor damage but no injuries. High winds were the apparent cause, according to Surface Force Atlantic. The boom, now lying across the cruiser’s aft Vertical Launch System cell doors, damaged the stanchions and line on both sides of the ship as well as a 25mm gun mount, force spokesman Lt. Cmdr. Bill Urban said. Urban said the boom, which was not lifting anything at the time of the incident, does not appear to have caused any damage to the VLS. “We’re obviously thankful that no one was injured,” Urban said. Urban, who could not supply the exact time of the incident, said high winds apparently blew the boom over. Winds were brisk Monday afternoon, forecast to be blowing at 10-20 mph with gusts to 30 mph, according to Weather Underground. The ship remains moored at the naval station’s Pier 2. SurfLant, naval station officials and a team from crane operator BAE Systems are investigating the incident, including procedures, operations and the exact cause, as well as inspecting to determine the full extent of the damage, Urban said. More immediately, officials will work with the ship to develop a plan for removing the crane, which will probably take place Tuesday, Urban said. Urban said the damage was not expected to impact Monterey’s operational schedule.