A truck mounted crane tipped over while working on the town hall in Trussville, Alabama yesterday.

The reason? The photos that we have been sent clearly indicate the lack of any outriggers, while the boom is not only fully extended, but also at a fairly low angle as indicated by the fact that it came to rest on the truck preventing a complete overturn. 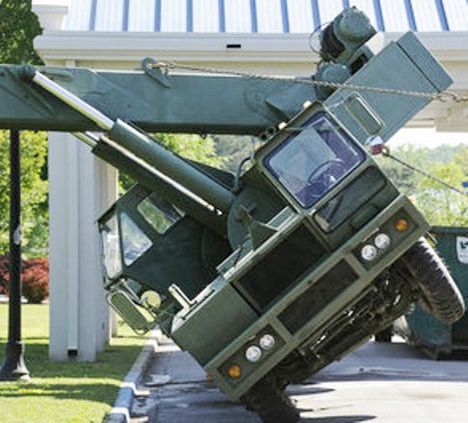 The crane, a vintage four axle P&H truck crane, is apparently owned by the City of Trussville, which is located to the north east of Birmingham, Alabama. It was carrying out repairs to the building, including the replacement of a canopy over the front entrance, following storm damage.

Fortunately the crane tipped while reaching away from the building, one assumes to lift materials from a truck positioned some distance from the building. So no one was injured in the incident and any property damage was restricted to the crane, the truck and the load.

A crew used winches and a wrecker to pull the unbalanced crane back onto its wheels and work is said to have continued, one hopes with a different crane and most certainly an operator who knows what he is doing!