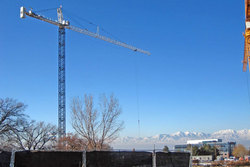 Employing a Peiner SK 415 tower crane, Bigge is helping to construct a new 200,000 square foot facility as part of the Utah Science Technology and Research (USTAR) project on the U of U campus. The new building, expected to be completed in 2012, will be named the the James L. Sorenson Molecular Biotechnology Building – A USTAR Innovation Center. Once completed, it will serve as a center-point between the colleges of Engineering and Health and Medicine.