A 500 ton All Terrain crane has overturned at the National Cathedral in Washington DC.

The crane a 500 ton Liebherr, the flagship of Maryland based Crane Service Company, had been assisting with repair work on the cathedral from damage caused during the recent earthquake. It was rigged with almost full luffing jib and Y-Guy boom support system and had just placed a load of steelwork onto the cathedral roof.

The challenge now is to remove the crane just four days before president Obama is due to speak at the cathedral on the 10th anniversary of the World Trade Centre attacks in New York.

Occupational Safety and Health Administration (OSHA) inspectors arrived at the scene shortly after the accident and are investigating. 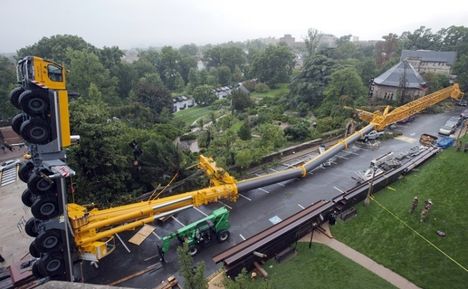 The weather was reportedly stormy at the time with heavy rain and, according to some reports, winds gusting as high as 40 to 50 mph.

Something caused the crane, which was slewed over the side at the time to overturn backwards dropping the boom and jib down onto four parked cars, while clipping two smaller buildings in the grounds. Thankfully no one was seriously injured, although the crane operator was taken to hospital with what we understand to be minor injuries. 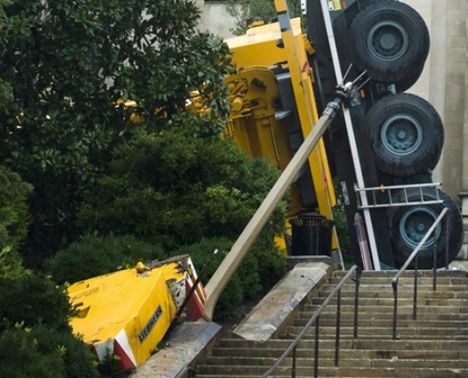