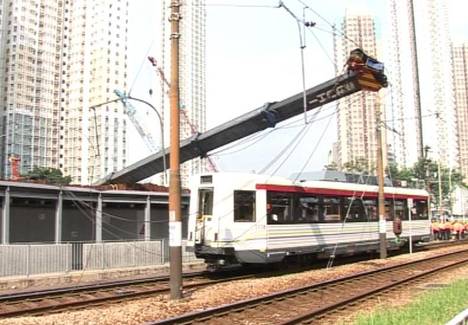 A number of train passengers were injured yesterday in Hong Kong when the 40 metre boom of a Rough Terrain crane struck the carriages of a light rail transit and brought down overhead power lines after it tipped over. The crane’s boom came down on a Light Tail Transit compartment near Tuen Mun station. Reports say that two people were seriously injured while 14 others received minor injuries. It seems fairly clear that the main cause of the accident was an outrigger issue, at least one of the outriggers on the side that it tipped, either punched into the ground or was not extended.

75 cranes to go to auction