A crane lifting a bride and her sister at a wedding in Gujarat state, West India overturned killing a man below and injuring four others, including the bride and sister.

The telescopic crane was lifting the two ladies in a large illuminated crystal conical platform and preparing to lower them into the wedding venue, as fireworks flashed from the sides of the structure.

As it came down with its boom fully extended the crane began to tip. There were no guests underneath the load, but as the load radius extended with lowering boom, the load and boom nose dropped close to where a small group of men were standing.

One of them ran towards the falling cone as it hit the ground, but was then struck by the boom which of course followed a few seconds behind the load. He died at the scene and was reported to be 40 years old. We do not know the condition of the others and are not certain of exactly when it occurred.

Local police announced that the crane had been set up on soft uneven ground and that the outriggers sank into the mud, causing the crane to overturn.

Yet another example of poor set up and the dangers of lifting people with cranes. 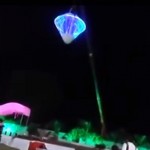