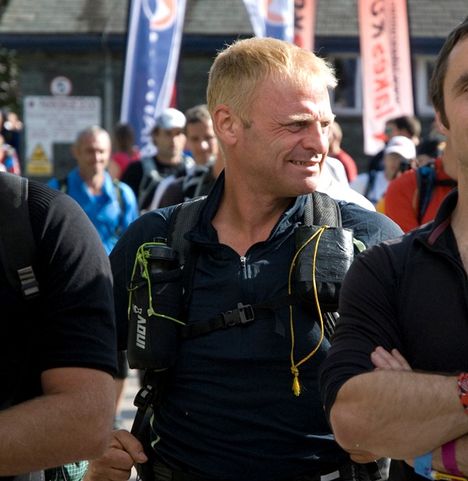 Michael Brown, 46, until recently a tower crane operator with Kier Construction in the UK, is running a race from John O’Groats in northern Scotland to Lands End in Cornwall. The race is in aid of the charity Project Mobility 4×4, which equips off road vehicles for amputees coming back from the various conflicts around the world.

The vehicles are used to both provide much needed transport to hospital and rehabilitation centres, as well as provide off-road days and recreation to give the young amputees a break from their wheelchairs. The charity also helps organise dissabled participation in off-road rally’s such as the Dakar.

The run which has been planned for some time finally took off on its first leg yesterday and ee do have an update from Brown this morning: It seems that he went straight to the front and stayed well ahead of the pack, finishing the 63 mile section 17 minutes ahead of Torkel Skogman, 40, in second place. He just needs to keep that pace up for another 15 days!

As to the point of the whole thing: – in Brown’s own words:

“Hi Leigh, I’m sorry I left this so late but there was a change of plan due to the stretched resources of the Charity. The reasoning and the motivation for this is to help a group of people who are helping our burgeoning number of Amputees coming back from conflict, these people have given so much and deserve our help.”

“The original plan was to run a longer route calling and staying over at the various garrisons down the country raising money and awareness for Project Mobility 4×4, we were going to be giving inspirational talks about endurance and inspiring the able and disabled alike to do their own events for Project Mobility 4×4. But a vehicle and volunteers are so stretched it’s not viable.”

“Plan ‘B’ has been implemented, I am now going to race other athletes from John O’Groats to Lands End in 16 days doing 55+ miles a day for 860 miles. This was first attempted last year twelve started and only three finished due to impact injuries. This year only eight are starting. We are starting Friday the 22nd from John O’ Groats and finishing on Saturday the 7th May.”

There is web page where people can donate, www. charitygiving.co.uk/michaelbrownjogle

But more than just donating, I am asking people to join Project Mobility 4×4, we need more volunteers nationwide this in turn also raises the profile. I currently still unemployed and I’m flying to Inverness this evening to board the Coach and we will awake at John O Groats on Friday to start the race.

The event page is www.ultrarace.co.uk/events/route/?eventid=94

To learn more about the supporters of Project Mobility 4×4