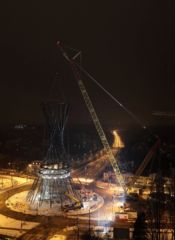 Schmidbauer has added its muscle to the Munich art scene by helping to erect a 52 m high sculpture. The company used its 600 tonne capacity Liebherr LR 1600/2 crawler crane to mount the 57 tonne top section of the Mae West statue onto its base at the Effnerplatz roundabout in the German capital.

The slender sculpture, created by USA artist Rita McBride, is a symbol of womanhood, using swirled supports to depict the circulating movements of a dancer. At 37 m high, the upper section was placed on the 15 m lower section using an outreach of 42 m.

Schmidbauer was faced with a number of challenges. For example, the complete upper part consists of carbon-fibre reinforced plastic (CFP), which combines lightweight, stable and durable properties. According to Liebherr, this was the first time the material has been used for this purpose, meaning there was no previous experience to call on.

Due to the low deformation capacity of the material, the 37 m high structural element had to be fastened onto the lower carrying ring. To achieve this, chain lines were fastened to eight securing points. This required millimetre precision using the crane’s sensitive control system, said the company.

The job was not made any easier by the Effnerplatz being in one of the busiest traffic areas in the eastern part of Munich. The roundabout was partially closed off while the LR 1600/2 was erected on the spot with an 84 m main boom, 12 m fixed jib and suspended ballast. Due to the density of the traffic, the surrounding road was only partially blocked off during the lift itself. The roundabout was only completely blocked off when the load was raised, for about 20 minutes.