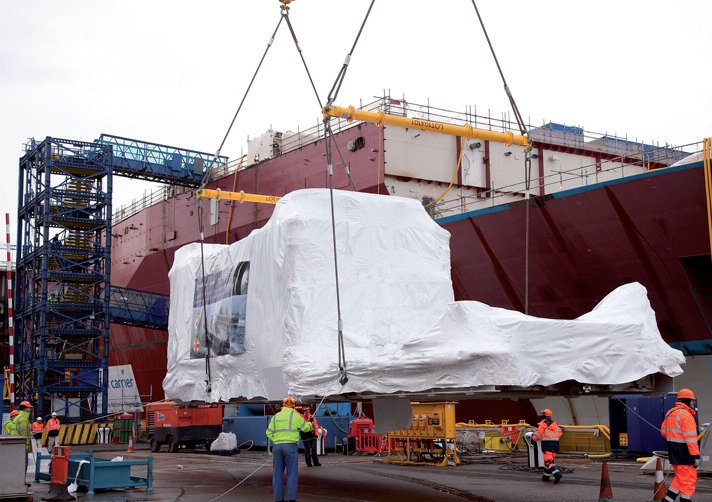 Having previously worked together on a number of successful heavy lift projects in the past, Rolls-Royce approached lifting experts Modulift in 2010 with the task, knowing that they were in safe hands. The project involved lifting and installing the turbines, which were housed in a steel protective package onto the ships structure. In order to install the 120t MT30 turbines, Modulift carried out various skid weighing tests and a mammoth amount of compliant documentation, to ensure that the project went to plan.

Over time, the MT30 gas turbines will be installed on a number of naval ships, which will provide two thirds of the 109MW needed to power the 65,000t ships – enough to power a small town.

To meet Rolls-Royce high specification requirements, Modulift provided three spreader beams to lift the turbine in a ‘one over two’ formation. Instead of using off the- shelf products, the beams were specially fabricated in order to meet the custom strut length requirements, as specified by Rolls-Royce.

When it came to Modulift designing the rig plan, the level of quality and accuracy was extremely controlled. Any technical or miscalculation errors could have resulted in the gas turbine capsizing when lifted into place by the Goliath crane. Due to the quality of Modulift’s rig design, the turbine was accurately lifted level at 0.2 degrees.

Sue Caples, operations manager and head engineer at Modulift said, “The Gas Turbine had a 75/25 offset centre of gravity, which meant that we had to design a lifting rig that would enable the turbine to be lifted level despite the extreme offset CG. We achieved this by designing a ‘1 over 2’ Lifting Rig that had different length top slings so that the crane hook would be directly over the centre of gravity during the lift. It is important for loads to be lifted level particularly for installations such as this one, and it was a great success because the load was level within 0.2 degrees from horizontal. We are very pleased to have provided the lifting equipment for such a prestigious project.”