A massive load of steel beams plummeted 40 stories from a crane perched atop a World Trade Center tower that is under construction Thursday morning — slamming into a flatbed truck and sending workers scrambling for cover.

Miraculously, no one — not even the driver of the truck — was injured in the 9:58 a.m. accident at the Lower Manhattan site. Work at Tower 4, where the crane was located, was later partially shut down as investigators from the Port Authority, FDNY, the Department of Buildings and OSHA pored over the scene. 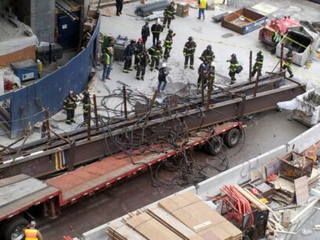 Witnesses said the falling beams sounded like a plane, crashing into the truck with a ferocious roar that resembled an explosion that left them to fear the worst.

“All of a sudden I heard a whoosh, the cable snapped and the entire load came falling,” said Matt Bergen, an engineer working at the site. “I originally thought it was another plane, because it sounded just like a plane. I’m amazed it didn’t hit the building or anyone on the ground.”

The crane, which was operated by DCM Erectors, Inc. was perched atop Tower 4, said a spokesman for Tishman Construction, which manages work at the site. DCM Erectors was cited in 2007 for unsafe hoisting operations after an accident at the Goldman Sachs construction site across from the World Trade Center site, the Daily News reported.

In that case, seven tons of steel fell 25 stories onto an architect’s office in a trailer next to the site. The architect was paralyzed in the accident.

In Thursday’s incident, the driver of the truck wasn’t injured, witnesses said. One worker at the scene was treated for minor injuries, but refused further medical attention, an FDNY spokesman said.

Frank Pensabene, a worker who was on Tower 3, next to the building with the crane, said the accident caused the loudest boom he had ever heard.

“The sound waves shook my system,” Pensabene said. “If one of our brothers was underneath there, he would have been crushed alive.”

Mike, a worker at the site, said he was shocked no one was injured in the accident. “I thought everyone out there was going to be dead,” he said. “Everyone was screaming, ‘Get out of the way.'”

Workers from Tower 3 halted construction and gathered in Zuccotti Park, across the street from the site, after the accident.

The accident happened in an enclosed section of the site that’s not open to the public, the Tishman spokesman said.

Tower 4, scheduled to be completed by the end of 2013, will eventually be 72 stories. Work on the tower has reached the 62nd floor.

OSHA last inspected DCM Erectors’ World Trade Center site in September 2011 and found no violations. In the last five years, OSHA has cited DCM Erectors for seven safety violations at job sites in New York. The company was fined $9,000 for using inadequate fall protection at a construction site at 150 Greenwich St. in 2010, and paid a $3,000 fine for the same problem at a site at 550 W. 120th St. in 2008.

After the 2007 incident at the Goldman Sachs site, OSHA inspectors fined DCM $9,450 for not using proper rigging equipment.