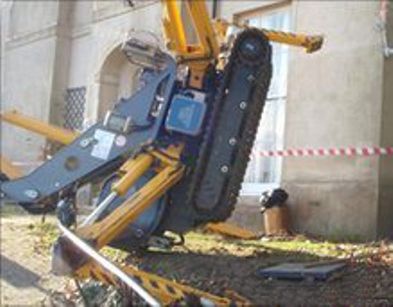 Two men working for a tree surgeon were injured yesterday when their lift went over in Dorset, UK.

The two men, said to be in their 20s, were airlifted to hospital with serious leg injuries after their spider lift tipped over in the village of Milborne St Andrew.

A Health and Safety Executive officer visited the site with police who said that the men had been trimming tree branches at a height of between 10 and 15 metres when the accident occurred.

One of the men was airlifted to hospital in Dorchester by the Dorset and Somerset Air Ambulance, while the other was taken by Dorset Police’s helicopter.

It is hard to see what actually happened here, it is exceptionally rare for a properly set up spider lift to just ‘tip over’ it looks as though the boom was fully raised and that the unit went over backwards.

Tree trimming is a hazardous job, even when using the right equipment and the most common cause of accidents like this is a large cut limb hitting the platform. Improper outrigger set up is of course another issue. Hopefully these two young men will keep the full use of their legs and that we can learn what happened for the benefit of others.