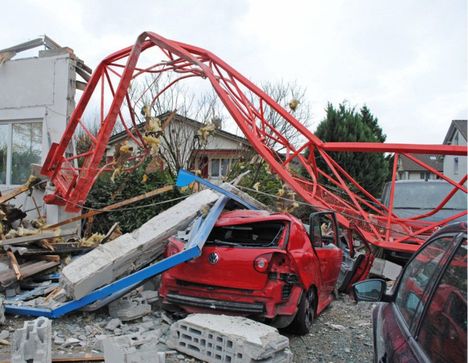 A 45 metre free standing tower crane went over in Studen in the Canton of Bern in Switzerland last week, injuring three.  The crane, a fairly recent WolffKran owned by the Thun based contractor Frutiger, was mounted on a cross base which was sitting on built-up ground, retained by pilings. The ground was totally saturated from heavy rain and it seems that one leg of the cross base sank into the ground causing the crane tip over and twist, throwing the concrete counterweights to the ground.  The back mast and tower landed on the Linde Restaurant and a car body shop. The operators cab broke free from the crane when the back mast pierced the restaurant roof and suddenly stopped the towers fall, it then crashed through the roof of a car port which helped to cushion the fall. The operator was taken to hospital with a broken shoulder. 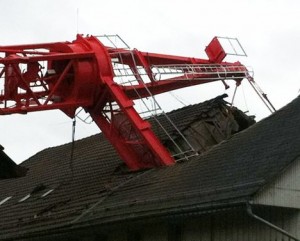