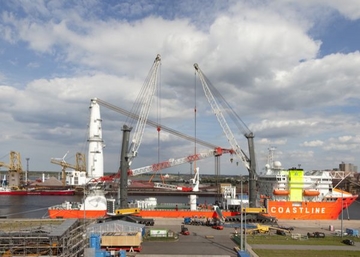 Singapore based offshore lifting company Coastline Maritime has mounted a Liebherr MTC 78000 heavy lift offshore crane onboard the heavy load vessel the OSA Sampson.  With a total deadweight of roughly 1720t, Liebherr claims the MTC 78000 is one of the biggest offshore top-slewing cranes in world capable of lifting 1600t at 35m.  Fifty mechanics fitted the crane to the OSA Sampson at Liebherr’s Rostock manufacturing plant in just over three weeks, using two Liebherr 208t LHM 600 mobile harbour cranes for tandem lifting.  One of the heaviest lifts involved the crane’s 370t slewing platform.  The platform features a 70t, 9m-diameter, custom-machined slewing ring, as conventional gear cutting machines can only be used to fabricate slewing rings with diameters up to 5m.  This was followed by installation of the crane’s 240t machinery compartment, along with upper and lower mast sections weighing around 160t and 250t respectively.  For the upper mast section, the harbour cranes were fitted with tower extensions enabling lifts to the required height of 43m above the pier.  Finally the 87m boom was positioned and pinned to the slewing platform using a specially developed hydraulic pinning machine.  Coastline Maritime’s purchase is the second of four orders Liebherr has taken for the 78000tm offshore crane.  It was installed on the heavy load vessel along with a 100t Liebherr CBO 3600.