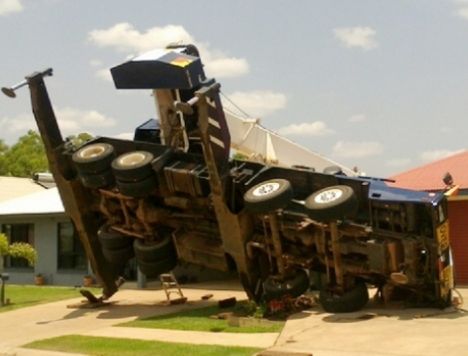 A crane overturned yesterday in a suburb of Darwin, in the Northern Territory, Australia, dumping the pool it was lifting, after one of its outriggers gave way.

The four axle truck crane is owned by rental company, Tutt Bryant, part of the Tat Hong Group, which has depot in the area.

The crane had set up on the sloping drive of a private home, in Palmerston, in order to lift the fibreglass pool into the back yard. As the crane came close to the radius at which it would have lowered the load, the front outrigger on the loaded side of the crane sank into the ground causing the crane to lose stability.

No one was injured in the incident although the pool was damaged beyond repair and the roof of a car port was damaged.

The photographs clearly show that some sort of cribbing or mats were used under the outrigger set up on the main drive and one assumes the same would be true of the jack that sank, although it looks as though it was close to a gap in the paved area.