Two cranes tipped over yesterday in separate incidents in the state of Vermont, in one a boom came down on a store.

The first was a large National Crane boom truck owned Vermont Structural buildings of St Albans which overturned as it was preparing to lift a one tonne steel beam in the town of Georgia.

The crane had its outriggers fully extended with mats under the outrigger pads, it was rigged with a fully extended main boom plus its manual swingaway extension. As it started to lift and the crane started to flex a little, at least one of the outriggers slipped off the mats causing the jacks to sink and allowing the crane to overturn with its boom coming down onto a local store. 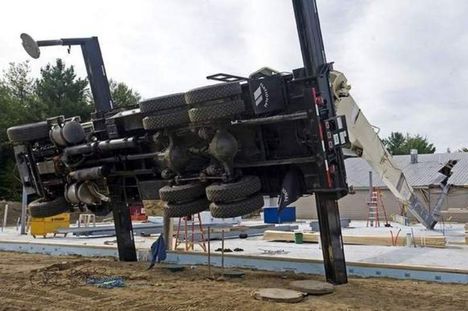 The crane was in fact working on the construction of a replacement store next door and has therefore started the demolition work on the old store, before it has been vacated!

Thankfully no one was hurt in the incident. Although as the crane was removed the man cutting the boom in half from a ladder was almost knocked to the ground as the crane separated from the top half of its boom.

News is also coming in of a 75 ton crane that overturned in the centre of Calais Vermon, possibly injuring the operator. We will publish a seperate report on that incident when we have more details.