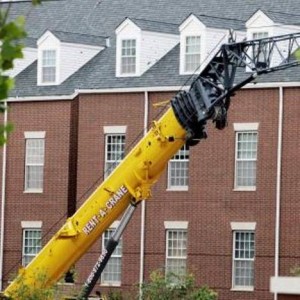 We have been sent basic details on a fatal crane accident last night at the Chesapeake Energy Corporation’s campus in Oklahoma City, after something fell from the crane. We have very little detail, but can say a 42 year old man, Michael Parsons, was killed and another injured as they were storing the crane for the night. Police reports say that “something fell from the crane and landed on the two men” The crane, a mid sized telescopic, is owned by local company Rent-A-Crane and was rigged with a hydraulically offsetable swingaway extension. That’s all we know, OSHA is expected to arrive on site later today and take over the investigation.

Raising of Our Lady