A report has been issued regarding the cause of the fatal 1,000 tonne crawler crane collapse in China last October.   The report – or ‘final findings’ – was issued by the Jiuquan City People’s Government on December 16th, in a statement made by Jiuquan City administration secretary Yanzheng Lu. 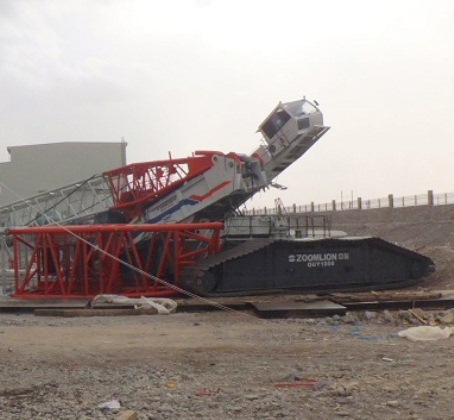 He added the investigation determined that the collapse was caused by the crane being set up out of level and at an angle exceeding the cranes design parameters. As a result, as the crane slewed side on to the slope, the side or lateral stresses on the boom from the 318 tonne load, caused it to buckle and fracture.

While administrative penalties were issued to the above, the report went on to apportion direct blame and responsibility for the accident and in this Zoomlion appears to have been exonerated and cleared of all fault. The main causes were attributed to the operator, the general management, plant management and safety managers at the contractor and production facility, all of which led to an overall lax system of safety.

Six individuals were accused of being directly responsible for the collapse – which took five lives – and will face further penalties, while a further three had their qualification and operating certificates revoked.

We have to admit to finding the intricacies of the Chinese legal system and local regulations slightly difficult to understand. However in essence this report states clearly that the crane had no fabrication or design faults that contributed to this sad incident. It clearly places all the blame on the fact that the crane was set up on a mat/platform that was out of level – (fore and aft).

Some of the photographs certainly appear to show a slight slope and the superstructure appears to have been approaching or even passed the 90 degree point, at which the boom would have been subjected to the maximum lateral forces caused by the slope.

Any operator or crane man on site at the time should have spotted this by where the load was in relation to the boom and the cab. Given that this was a new crane it is also surprising that there were no manufacturer staff present to help the crane team set up for the first time.

While smaller crawler cranes, especially duty cycle cranes, can handle some significant side loads, more sophisticated lift cranes are rarely designed to accommodate them to the same degree, so setting up on a level base is critical. This incident smacks of inexperience, lack of training and of not taking what is a highly sophisticated and dangerous piece of equipment, seriously enough. There is much to learn here.

On another note it is refreshing to see how promptly this incident was investigated and a report put together so that others could learn and the innocent were not left in limbo for excessive periods. Even in the case of a major accident such as this the causes are usually clear within the first 48 hours, and the deeper underlying causes within a month or two – this type of information rarely becomes clearer with the passage of time. The UK for one could learn a great deal from the time frames involved with this investigation.