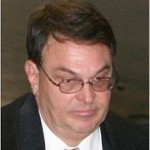 Millionaire construction magnate James Lomma tried to wiggle through a semantic loophole today in his manslaughter trial for the fatal 2008 crane collapse on 91st Street — by calling an admittedly-faulty metal part a “replacement,” not a “repair.”

Manhattan prosecutors say Lomma intentionally dodged city regulators when he failed to give them prior notice before installing a cheaply and poorly manufactured giant metal bearing in his 30-year-old tower crane — the same massive, ring shaped bearing that would crack apart in the collapse, sending half the crane plummeting 20 stories to the ground.

But in cross-examining former Department of Buildings Cranes and Derricks Unit head Bethany Klein, defense lawyer Paul Shechtman repeatedly referred to a letter in which Lomma personnel promised only that they’d give the DOB prior notice of pending “repairs” — not prior notice of totally replacing the bearing.

Klein and prosecutors, meanwhile, say that while the bearing was replaced, that replacement was part of a larger repair — the repair of the crane’s turntable, a huge, complex, box-shaped metal structure that allows the crane’s boom and cab to rotate on its stationary tower.

“You required notification of a replacement?” Shechtman — who represents Lomma’s company, New York Crane, asked Klein in one of several vocabulary back-and-forths.

“We required notification of the repair to the turntable,” Klein answered — stressing the word repair.

The whole matter could be moot should Manhattan Supreme Court Justice Daniel Convisor buy the larger defense theory, which is that workers caused the collapse by improperly over-extending the boom, thereby over-stressing the bearing.

Prosecutors insist that there is is zero proof the workers are responsible — and overwhelming proof that the faultily-constructed bearing is to blame.