Craneblogger is pleased to announce that Balaji Krishnamurthy has agreed to have his “Food for Thought” publication appear regularly in our “Crane Business” section. 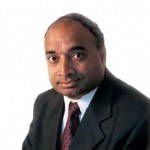 About Balaji Krishnamurthy:
Balaji is the founder and principal of LogiStyle, a management consulting firm helping corporations develop logical leadership, Balaji Krishnamurthy communicates decades of corporate leadership experience through provocative logic and passionate delivery. As President and Chief Executive Officer of Planar Systems from 1999 to 2005, he led the company’s transformation from a display component manufacturer to a full-service provider of flat-panel display hardware and software. Even as the technology industry collapsed, annual sales of this Nasdaq high-tech company more than doubled under his watch, to $256 million.

With a strong track record as a general manager, Balaji earned his stripes in engineering, marketing and general management roles during a 15 year tenure with test & measurement device maker Tektronix. At the laboratories of Tektronix and General Electric Co., Balaji had established himself as a world-recognized researcher in various computer and electric al engineering fields of study.

Balaji defines leadership as the product of leverage and legacy. He feels leaders must seek to influence a large number of people over a time long beyond their tenure. He is known for building an intentional culture within organizations that promotes empowerment and logical and critical thinking. He has been nationally recognized on many occasions for his concepts of transparency and stewardship in corporate governance.

In 2004 Time Magazine profiled Balaji as one of 25 influential business leaders worldwide, and he’s also appeared in publications such as Business 2.0 and the Wall Street Journal. With an incisive intellect and engaging communication style, coupled with an extensive background in science and technology, Balaji has become known for innovative, metric-based solutions to business challenges. For example, he placed himself last in line for payout from Planar’s variable compensation plan, explaining “those with the highest capacity to influence results should be rewarded only if they’ve first discharged their stewardship responsibilities to other stakeholders.” And among the behavioral qualities he daily strives to build into his organization’s culture are “speed and agility,” which he models himself for anyone who tries to keep up with him.

A frequent speaker at industry meetings and conferences, Balaji energetically engages audience on topics ranging from corporate governance and entrepreneurship to overseas technology investment, and is a quick-thinking contributor in question-and-answer formats.

The prestigious Birla Institute of Technology and Science, in Pilani, India, awarded Balaji his BS and MS degrees in mathematics. He earned a PhD in computer science from the University of Massachusetts, Amherst, in 1981.

Balaji, 55, and his wife Patricia live in Portland, Oregon. As an amateur magician he is always good for a quick card-trick. He has a passion for sports. As he says, “give me a team, rules and a goal; I’m there!”

Click here to view past issues of “Food for Thought”