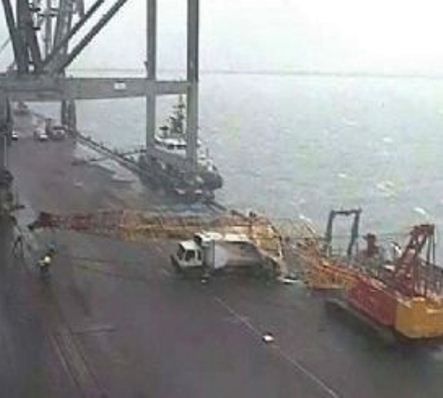 A runaway container crane on Darwin’s East Arm wharf in Australia’s Northern Territory crashed into a crawler crane earlier this week causing serious damage.  The accident occurred overnight when exceptional winds – said to be over 120kph – started the container crane rolling, after gathering pace it crashed into a crawler crane standing on the dockside causing its boom to buckle and come down on a nearby truck.

A spokesman for Darwin Port confirmed that the wind overrode the brakes on the container crane. Non one was injured in the incident which occurred at around three in the morning.

An initial investigation suggested that the container crane had not been tied down, in spite of the weather forecast and that the cranes brakes may not have been properly maintained.

Almost every year we carry a report covering similar accidents to this and in almost every case it involves forecasted high winds propelling a container crane into other objects.

In at least one case the crane itself was severely damaged after hitting the stops at too high a speed. Port cranes are not our speciality, you would have thought that there were procedures for restraining them in such weather conditions. Unlike weather vaneing tower cranes a dock side crane will eventually run out of track so it seems that tying down is the only option.