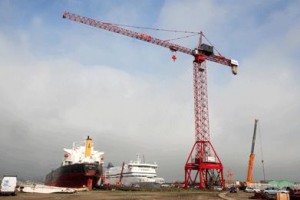 The largest Potain tower crane ever erected in Indonesia, an MD 1100, has been put to work at a shipyard in Medan, North Sumatra. Shipyard owner PT Waruna bought the crane for its newly constructed dock to help with the company’s shipbuilding and ship repair activities.

“We specified the MD 1100 because we needed a crane with a 50 tonne capacity to mount on a portal and run along a track that services our new dock,” explained Darwo Lim, president of PT Waruna Nusa Sentana, the second largest shipyard in Indonesia.

The design of the special application crane was adjusted for the application. Where it was built in Zhangjiagang, China, engineers designed it with a portal base to travel along the 130 m track to cover the full area of the 200 m by 37 m dock. It has a 60 m jib and height under hook of 43.2 m.

The 8 x 8 m portal allows trucks carrying materials to run underneath, which can then be unloaded and placed directly at the point of use. Work includes picking steel plates, shafts and propellers, and hatch covers weighing up to 25 tonnes.

The crane was sold by dealer Potaindo, which has been selling Potain tower cranes in Indonesia since 1990. It also has a rental fleet.