Perched above New York City’s skyline, two tower cranes are piecing together the new One World Trade Center, which just became the city’s tallest skyscraper. How do those cranes get up there? 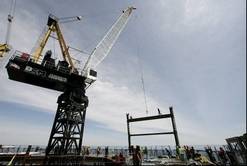 By using their own hoisting power to make themselves taller. While that’s the most common method, there are actually three ways: 1) the external climbing method, in which the crane — the arm plus its tower — expands upward along the outside of the building, 2) the internal climbing method, in which the crane builds a few floors at a time from the inside and then “jumps” to a higher spot, and 3) the “skycrane” method of airlifting in a crane on a helicopter. (Engineers at 1 WTC are using both of the first two methods.)

In the external climbing method, the base of the crane is fixed in a concrete slab in the ground, and the crane tower is erected beside the building using smaller, mobile cranes. Once the building is about 180 feet tall (some 15 stories), the crane is fastened to the building with steel collars, and new segments are inserted into the crane’s backbone. To add segments to itself, the crane has a special climbing section — a big metal sheath that scales the outside of the crane tower. This sheath raises the arm above the last vertebra and temporarily supports it, then takes in a new tower segment from the arm. The sheath holds that segment in place while workers bolt it in. They repeat this process every 180 feet or so: The crane constructs the building, then it’s fastened to the building, then it receives new vertebrae to grow taller.

The second way is the internal climbing method. The crane stands inside the center of the building, in a kind of makeshift courtyard, where it constructs the skyscraper around itself about a hundred feet at a time. A hydraulic cylinder at the crane’s base elevates it through the hollow middle of the building to a higher floor. Then workers slide steel beams underneath the crane to give it a sturdy new footing, and the crane begins building again.

The third method is to have a heavy-lift helicopter (or “skycrane”) fly the crane to the top of the construction site. This must be done piece by piece — just a single segment of a crane’s tower can weigh between 3,000 and 20,000 pounds. However, because of the cost, and because flying a load-bearing helicopter over a populated area is logistically very difficult, this method is the most rare, used only a few times a year nationwide.

Bonus Explainer: How do cranes get back down? Often by constructing the very gallows that will destroy them. To disassemble themselves, tower cranes construct derricks on the rooftop of the finished project. (Derricks are tower cranes’ simpler great-granddaddy.) These derricks then help dismantle the tower cranes, and — in the case of internal climbers — lower their parts one by one to the ground using extremely long cables. Once the parts reach the ground, they’re taken back to the rental service on flatbed trucks, then the workers take apart the derricks. Most of the derricks’ parts can just take the construction elevator. (External climbers, however, can jack themselves all the way back down.)

The Secret of Getting All the Referrals