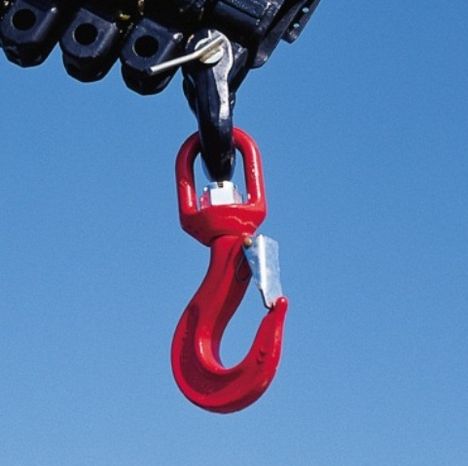 The failure was not due to the nut rotating off of the threads but rather over time it wore down the threads until the shank pulled through the nut. Fortunately no one was injured in the accident being investigated.

Unusually the hook shank was not fitted with any bearing or washer under the nut and between the nut and the main link. The absence of any form of bearing appears to have increased the loading placed on the roll pin.

Checks with the crane supplier revealed that the crane when supplied should have been fitted with a hook suitable for rotation of the hook under load and as such should have had a bearing between the nut and the main link.

During the investigation a number of recommendations were made to the loader crane/vehicle owner. These included;

• A check that the cranes within their fleet were fitted with a suitable bearing or washer.

• Training of operators to check the integrity of the roll pins during their pre-use checks.

The HSE intend to submit a request that loader crane standards are amended to clarify when bearings should be fitted to loader crane hooks.

This is a good case of an investigation into an accident – in some ways a near miss as no one was injured this time – has revealed very useful information and advice to those designing and checking cranes or any lifting appliance that uses a similar type of hook.

What we do not know at this stage is how must time has elapsed from the accident to the issuing of this warning. Hopefully a matter of weeks and not months or years.