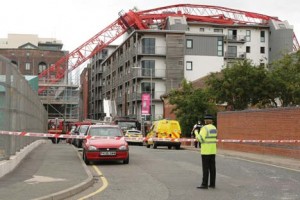 The collapse of the Liverpool crane in July is focusing on the foundation of the crane. The claim is that the base is to be excavated so I am working on the assumption that the base is a concrete structure which would be common. There isn’t a lot that we can do about this in the field, but let’s talk about the issue anyways. (I apologize for the tardiness, I was on vacation.) Story Link

Generally accepted engineering practices, most manufacturers, and in the US ASME B 30.3 require that foundations for cranes be capable of supporting 150% of the intended load. Occasionally I’ll see higher numbers, but 150% is the requirement. These numbers are developed off of Vertical Load, Torsional Moment (twisting induced in the horizontal plane) and Overturning Moment (the forces the structure apply to the foundation in the vertical plane in an attempt to become horizontal). The concrete foundation must have enough surface area for the given soil to resist the foundation twisting during operation and have enough surface area to spread the load along the soil provided. In the Liverpool case the crane appears to have changed from a Wolff 100 to a Wolff 500. While the torsional moment and vertical loads changed, the pictures indicate that the overturning moment is what was exceeded. If you increase the size of the crane, you have to increase the size of the foundation as well.

The base is being left as it was according to the report. I can only assume that the base did not significantly dislodge. What can happen here is the underlying soil is not able to resist the overturning moment while the luffing crane is boomed up. If the crane starts to overturn ever so slowly, the mast sections of the crane may eventually buckle and foundation may drop right back into place with minimal disturbance to the soil.

Cranes are to be erected to a degree of 1:500 in the vertical plane (commonly called 1 inch in 40 feet in the US). Geometry makes this true for the foundation as well. So if the base goes out of level by just a couple of inches, with the boom at a high angle, the base doesn’t have to move much to induce forces on the mast beyond it’s designed intended load. The crane that collapsed in Bellevue Washington was out of horizontal by 1 inch in 8 feet. That translated to 28 inches in the vertical, not include the normal tower deflection of around 10 inches. So you can see how two or three inches out in the horizontal would quickly cause some buckling.

The base of a crane whether on steel or concrete, foundations must be properly sized, as near horizontal as possible (I’ve always used 1/8 inch for 8 feet to stay safe), and they cannot be moving beyond this while in use either. The design of the foundation isn’t the only relevant factor. The design of the crane’s mast is for the plumb factor of 1:500 as well. No engineer designs both, so without the manufacturer issuing a letter, saying it’s ok to be out of plumb, you cannot erect the crane out of plumb.

If it’s a base design issue as noted, then the finger must be pointed at either the engineer of record, or the contractor for changing the crane after the base was designed. It’s like building a building foundation for a ten story building then throwing a 30 story on top of it. Who made that choice and who will write the check?

I look at the foundations as far as exposed size, concrete breaks, and soil reports. Beyond that, I’m not the engineer or contractor and it’s difficult to determine if things were done correctly.