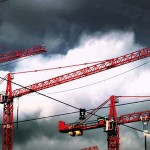 They often do not conduct proper site assessments, put in place adequate safety measures, train workers adequately or supervise them well enough, the taskforce said in its report yesterday.

The taskforce was set up in July by theMinistry of Manpower and the Workplace Safety and Health Council in the wake of a growing number of crane collapses.

The number of workplace accidents involving cranes soared by almost 27 per cent, from 128 in 2007 to 162 last year.

The taskforce, led by Bovis Lend Lease managing director Tan Wee Seng and comprising seven members from the Government and the contracting and crane industries, reviewed the 40 most-serious crane accidents that happened here between 2003 and 2007.

It identified the management’s failings behind 25 of the 40 cases studied, and said that the managers were also indirectly responsible for the lapses that led to the accidents.

These included individual workers who violated safety rules, machine components that often failed to work properly because of a lack of maintenance or improper use, and the use of the cranes on ground that was too weak or steep to support them.

Although these three factors “may contribute directly to the collapse of cranes, they are frequently a manifestation of the fourth and most important factor: management,” the taskforce concluded.

It pointed out that the management – “the main driving force behind the incidents” – was responsible for the amount
of supervision and training workers received, regular maintenance of machines and conducting site assessments.