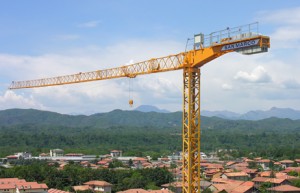 A provincial blitz of central Ontario tower cranes has received the full support of the International Union of Operating Engineers (IUOE).

“Tower crane safety is an important issue and we encourage any action that will help to ensure they are erected in a secure and proper manner,” says Mike Gallagher, business manager of IUOE Local 793. “Also, this ensures worksites are safe for our members and other construction workers.”

The Ministry of Labour has announced it will have its inspectors blitzing construction sites in the Greater Toronto Area, York Region and Simcoe County where there are tower cranes and mast-climbing scaffolds. Previous blitzes have found problems with wire rope on tower cranes and cracks in the turntables and structures of other cranes. However, the industry has been working with the ministry to improve safety, Gallagher says.

“Our investment in equipment, facilities and advanced training methods has helped to greatly improve tower crane safety records over the past 30 years by reducing incidents of operator error,” says Gallagher.

“At the same time, though, some contractors are using old equipment that can result in problems.”

A blitz by the province last year saw 120 project sites visited from May 1 to October 31. The inspectors issued 1,415 orders of which 151 were stop-work orders.

The average number of orders per visit was 7.7, a rate three times higher than an average labour ministry inspection, the Construction Safety Association of Ontario (CSAO) notes in a report.

A working group of construction industry management and labour stakeholders, chaired by Don Dickie, retired executive vice-president and general manager of CSAO, recently came up with 17 recommendations to enhance tower crane safety. Local 793 would like to see all the recommendations implemented by the province.

Among the committee’s recommendations are that on-the-job training for tower crane apprentices be improved and that training standards specify the minimum amount of time a trainee must spend at the controls of a crane.

The committee also recommends that regulations be improved to ensure an engineer or designate inspect and approve the foundation and bracing supporting tower cranes before the crane is erected.

Gallagher says he is concerned that some employers still are not supporting needed changes.

“As this is a matter of public safety, one that affects both operating engineers, employers and the public, we feel there is no time to waste in implementing these recommendations,” he says.