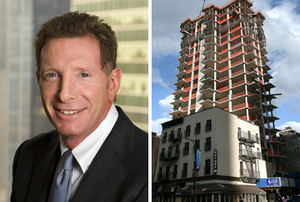 Arbor Realty Funding, the lender at the site of a fatal 2008 crane collapse in Turtle Bay, has filed a $69 million malpractice suit against Herrick Feinstein, alleging the law firm provided bad advice about the zoning regulations for the planned 42-story tower.

Manhattan-based Arbor provided $70 million in short-term bridge loans to help developer Jim Kennelly convert the several parcels at 303 East 51st Street into a luxury condominium, but a crane collapsed onto a residential building across the street, killing seven people, causing millions of dollars in structural damage and criminal convictions.

Arbor, in the April 25 complaint filed in New York State Supreme Court, claims that Herrick erroneously concluded that the high-rise could be legally built on the existing zoning lots without significant demolition and other modifications. After the collapse, the Department of Buildings concluded that the zoning had been approved “in error.”

Arbor said it was forced to foreclose on the site and sell the notes at a discount to investor Ziel Feldman in 2010, losing more than $32 million on the sale and incurring another $37 million in expenses for “protective advances” and lost charges.

“Herrick’s incorrect analysis of the applicable zoning regulations and its failure to commit sufficient and adequate independent due diligence caused Arbor to overestimate the value or potential value of the collateral, and Arbor made irreversible decisions with respect to the loans.

It closed the loans with the borrower while relying on Herrick’s erroneous advice,” wrote Vincent Syracuse, attorney for Arbor, in the complaint.

The suit centers on whether Arbor would have made the loans if it knew the condo had to be built as a “tower on base,” meaning that as a high rise-building, it would have to sit on a wide foundation that nearly extends to the street. Shorter buildings are usually zoned as-of-right, where the wide foundation is not necessary and the base of the building is set back from the street.

Arbor claims that it relied on advice from Mitch Korbey, of Herrick’s land use and zoning practice group, but the law firm says it was the transactional attorney on the deal, and warned the lender to retain a land use attorney to analyze the zoning issues.

“This baseless complaint conveniently ignores the facts,” Harvey Feuerstein, chairman of Herrick Feinstein, told The Real Deal, in a written statement. “We were not zoning counsel to Arbor, we advised Arbor to get a thorough zoning analysis from counsel and Arbor rejected that suggestion.”

He added that the suit “also overlooks that if Arbor lost money on this loan, the loss was of its own making and the result of the severe downturn in the real estate market and a fatal crane collapse at the site. We will vigorously contest this attempt by Arbor to strong-arm us, and we absolutely support our partner Mitch Korbey, whose zoning and land use credentials and abilities are superb.”

Attorney Barry LePatner, a noted expert on the New York construction industry, said the lender is responsible for making sure a site is safe and the documents are in compliance. He questions whether the lender was looking for a party to sue since the borrower and construction firms have faced extensive civil claims and in some cases criminal charges.

“It is a stretch to hold a law firm prior to a construction project commencing to be responsible for tower cranes, tower on bases safety issues and the like,” LePatner said. “Any clear analysis of responsibilities and failures to comply with the standard of care to preside over a construction loan will reveal where the problems lie.”