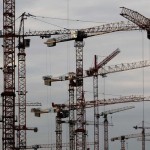 An engineer was killed after an argument with a tower crane operator while 40 meters in the air, according to a report in the Gulf News.

The 39-year-old employee climbed up the device to discipline the driver, who had told him that a request he made was “crazy”.

“As the victim reached the crane operator’s cab, the operator struck him on the head with a metal object, sending him plunging to the ground,” Colonel Al Sharifi said to the paper.

The CID received a report that the man had fallen from the crane because he lost his balance.

However, upon investigation the CID found that an argument had taken place between the 33-year-old Asian crane operator and … [the victim].”

After the argument the victim was enraged and insisted that the crane operator be disciplined for calling him crazy.

The crane operator reportedly confessed that he hit the engineer with a one-kilogramme metal object, claiming that he was trying to defend himself. He has been arrested.

In the report, Colonel Al Sharifi urged members of the public to show self-restraint and resort to reason as losing self-control can lead to jail and death.