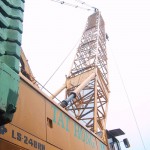 JUST a day after announcing that it had attracted a new strategic stakeholder with strong China connections to invest some $65 million for about 11 per cent stake in the company, listed crane lessor Tat Hong Holdings yesterday announced that it is buying into a prominent tower crane company in China for some US$10 million.

The mainboard-listed company is paying 69.65 million yuan (S$14.85 million) for a 53.8 per cent stake in Guangzhou Hailin Resource Co, a leading tower crane rental player in southern and south-western China.

Its joint venture partners are Yuan Zheng, the founder and majority shareholder of Guangzhou Hailin, and Singapore-listed Yongmao Holdings – which is 20 per cent owned by Tat Hong.

A specialist in the erection of power transmission pylons, Guangzhou Hailin has benefited from China’s massive stimulus package, which places huge emphasis on infrastructure and power sector expenditure.

Mr Yuan will inject his assets, comprising tower cranes and finance leases on tower cranes of Guangzhou Hailin for another 30 per cent stake in the new joint venture company. Yongmao will hold the balance.

Tat Hong’s cash investment will be injected in two tranches, and funded by internal resources and/or bank borrowings.

Roland Ng, president and group CEO of Tat Hong, said that the investment would give Tat Hong a strategic foothold in the key growth regions of southern China, especially Sichuan and Chongqing.

‘Guangzhou Hailin is a leading player in this region, where there is huge reconstruction activity following last year’s earthquake,’ he said.

Tat Hong will appoint three directors to the board of the new joint venture company and one member to its supervisory committee. It will also select and appoint the chief financial officer to the new company.

Mr Yuan will be appointed general manager of the new company.

All this comes just a day after Tat Hong announced that Asian private equity fund AIF Capital was investing $65 million via convertible redeemable preference shares, which represent about 11.4 per cent of Tat Hong’s enlarged capital, assuming full conversion. Some 80 per cent of the net proceeds will be used to expand Tat Hong’s business in Australia and China.

Why can’t you get more referrals?

It’s that time of year: “Call me back after the holidays.”