Working 14 hours a day more than 400 feet in the air is just part of the job for tower-crane operator Dennis Herman. 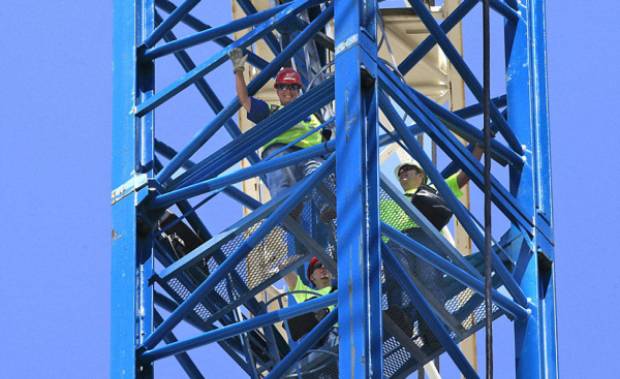 Ernie Begley, top, James Higginbotham, right, and Sean Hyatt are crane operators, a high-pressure job in which a miscalculation could cause their crane to hit a building

But his current gig at the construction site of Ohio State University’s new cancer hospital and research institute has special meaning. Herman, 39, is a cancer survivor who lost both his father and grandfather to the disease this month.

“This building here is very, very important to me,” he said.

“I’m working at an OSU building that hopefully cures cancer. It’s the tallest building at OSU, and everybody sees you. It’s (given me) pride and gratitude doing this.”

He wakes up at 3 a.m. at his home in Heath in Licking County to get to work on time and climbs for 20 to 30 minutes to get to the crane’s cabin above what will be an 18-story building. He stays there for the next nine to 14 hours.

The cabins are about the size of two portable rental toilets, said Ernie Begley, an operator from McDermott in Scioto County who also is working at Ohio State.

Speaking of which, the closest thing to a bathroom up there is a 10-gallon bucket for “ emergencies,” Begley said.

The heights, the long hours and the technical skill needed to maneuver a 7,000-pound slab of steel within a quarter-inch of its target area scare people off, Herman said.

The number of tower cranes operating in Columbus is higher than in previous years; there are construction sites at the federal courthouse and the Hilton Columbus, both Downtown, as well as at Ohio State, said Brian Gibson, president of Capital City Group, which rents construction equipment.

To work for Turner, operators must be certified and have at least 1,000 hours on a crane without incident, said Kyle Rooney, the vice president and general manager of the local office of Turner Construction.

Huber said it takes “a lot of expertise for this type of construction. High-rise is a lot more dangerous.”

Herman said the two tower cranes at Ohio State come within 20 feet of each other, and a miscalculation could cause him to hit one of the six buildings surrounding the site. The hospital helipad also is nearby, and several of the operators described the winds at that height with a grimace.

They still manage to make it homey. Photos of Begley’s children brighten his cabin, and a tiny refrigerator and toaster oven are squeezed in.

The end of construction won’t be the end of Herman’s connection with the cancer center. During the “topping out” ceremony on May 21, when the last beam was moved into place, construction workers signed a white beam that was placed in the building. Herman’s father thought that his son was crazy for spending his days hundreds of feet in the sky, but he didn’t hold back tears when Herman signed his father’s name to the beam as a lasting tribute to him, Herman said.

“It’s like the soul of the building,” he said, describing the beam. “We were part of this. It’s not just a regular building. It’s our building.”

Goals Revisited. Met and Unmet. Why You Don’t. And What To Do!