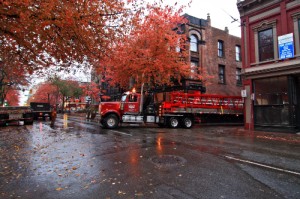 People who haul construction cranes say they are being targeted unfairly by Hamilton police, and the practice is giving the city a business-unfriendly reputation.

Scott Smith of Cincinnati-based AmQuip, “The Crane People,” joined two of his competitors at Wednesday’s City Council meeting to voice their concerns.

“Hamilton has become known as a hotspot, where you can’t come in to town or drive through without getting nailed,” Smith said. “It’s pretty evident that they’re looking for a reason to void the permit, and there are a million different things that can make a permit void.”

Smith said Ohio laws dealing with crane-hauling are outdated and need changed to reflect new technology. Also, he said it appears Hamilton police are targeting the crane haulers to increase revenue. Fines from citations and getting renewed permits can cost up to $2,000, he said.

Where is the new customer?